Today, hair transplantation is usually carried out in a single “mega session”. The whole mega session procedure (collection of hair follicles from a donor area behind the patient’s scalp and placement of the collected follicles into the recipient area) is completed in a single session which takes a few hours. Multiple sessions may be a better choice for some patients depending on patient wishes and factors such as medical conditions.
For 3 to 6 months after transplantation, most of the transplanted follicles develop in new areas and generate new hair. Some transplanted roots cannot grow in their new environment.

PRP treatment can be used as a way to improve survival rate of the transplanted hair follicles and encourage recovery of minimal scarring that leads to PRP trials. PRP treatment is being used in sports medicine, orthopedic surgery and dental surgery, and in a number of other medical and surgical specialties to improve tissue regeneration and healing after surgical procedures or injuries.
To answer the questions related to PRP it is best to have a look at platelets, the center of platelet-rich plasma.

Contribution of PRP to healing process 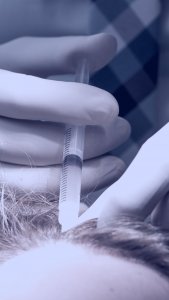 The reason for the use of PRP treatment in hair transplantation operations is to artificially increase the number of platelets in a region where the storage of growth factors in platelets can be used for tissue recovery, regeneration and the health of hair follicles.

This website uses cookies to improve your experience while you navigate through the website. Out of these, the cookies that are categorized as necessary are stored on your browser as they are essential for the working of basic functionalities of the website. We also use third-party cookies that help us analyze and understand how you use this website. These cookies will be stored in your browser only with your consent. You also have the option to opt-out of these cookies. But opting out of some of these cookies may affect your browsing experience.
Necessary Always Enabled
Necessary cookies are absolutely essential for the website to function properly. These cookies ensure basic functionalities and security features of the website, anonymously.
Functional
Functional cookies help to perform certain functionalities like sharing the content of the website on social media platforms, collect feedbacks, and other third-party features.
Performance
Performance cookies are used to understand and analyze the key performance indexes of the website which helps in delivering a better user experience for the visitors.
Analytics
Analytical cookies are used to understand how visitors interact with the website. These cookies help provide information on metrics the number of visitors, bounce rate, traffic source, etc.
Advertisement
Advertisement cookies are used to provide visitors with relevant ads and marketing campaigns. These cookies track visitors across websites and collect information to provide customized ads.
Others
Other uncategorized cookies are those that are being analyzed and have not been classified into a category as yet.
SAVE & ACCEPT
.